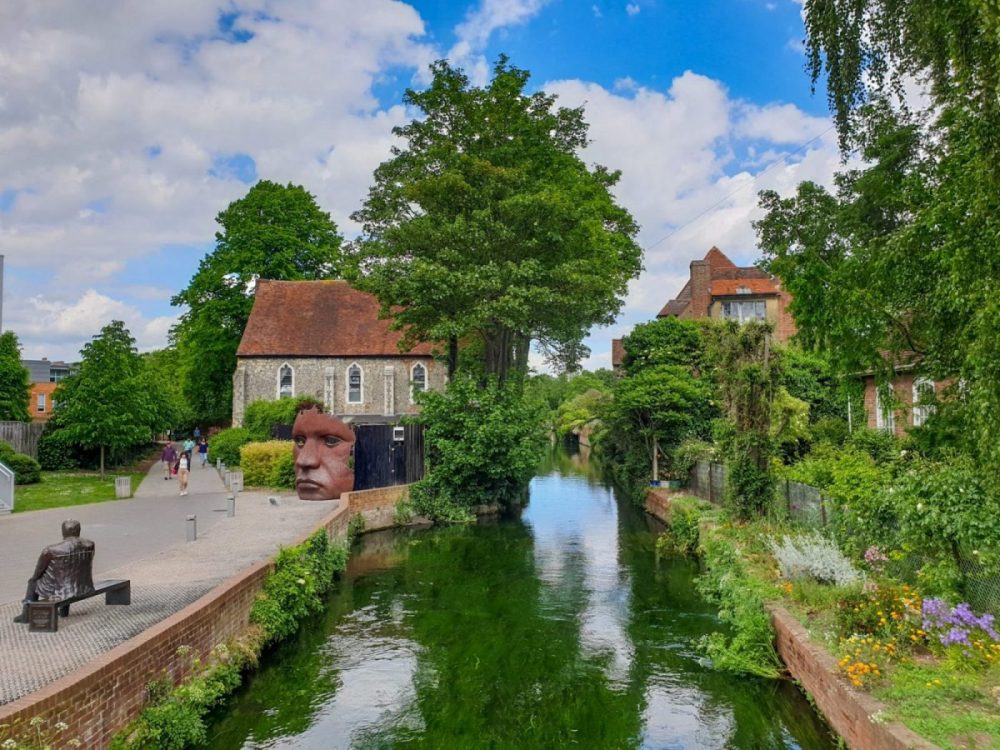 10 things to see and do in Canterbury

After visiting Dover and its cliffs we decided to stop in Canterbury, the medieval pearl of Kent! (located along the way to our return journey to London). From Dover we took a bus from the train station (that day in particular, in the absence of trains, replacement buses were operating) and in about forty minutes we arrived in this attractive medieval city of Kent. The city fascinates even before arriving thanks to the presence of the magnificent views that surround it, characterized by large green spaces and parks, which only give a sense of serenity. Canterbury is also very charming, still retaining that ancient medieval flavour with narrow streets and half-timbered houses. The rhythms are much calmer than hectic London. In this article I talk about 10 things to do and see in Canterbury.

WHAT TO SEE IN CANTERBURY

Famous for its cathedral (Mon-Sat 9:00-17 Sun 9:00-16:30 £14.00) declared a UNESCO World Heritage Site, imposing and elegant, it was built in the Gothic style in the eleventh century and is one of the most beautiful in Europe. Unfortunately, at the moment, it is undergoing renovation but you can safely visit inside (updated in February 2021). Seat of the Archbishop of Canterbury, the leader of the World Anglican Communion, Canterbury Cathedral is England’s main Christian monument. In the Middle Ages it was the most revered pilgrimage site in Northern Europe. It housed the tomb of Thomas Becket, the archbishop has been assassinated by the followers of King Henry II near a cloister door in 1170. This Norman building was severely damaged by a fire in 1174 which was restored in various Gothic styles. Allow yourself as much time as you can to see the nave in perpendicular style, with the wonderful fan vault at the intersection.

the interior of Cathedral

One of the things that struck me the most was the St Martin’s Church (Mar, Thu, Fri, Sat 11-15 Sun 10-10:30 free entry) dates back to the end of the 6th century, but also includes earlier Roman elements such as a brick tomb. The church was founded by the pagan king Ethelberht of Kent to allow his Christian wife to practice her religion. In the stone construction of the church, you can see hundreds of Roman bricks. Although it is not known whether these came from a surviving Roman building or were reused in the Anglo-Saxon era. The baptistery has a surprising Roman fountain with sculptures of arcades and interlocking circles.

I recommend walking to the Westgate Towers Museum (Mon-Sun 11-16 £4 you can make the combined ticket with the Canterbury Tales £13.95). The last of the seven medieval gates defending Canterbury, the 18-metre Westgate, is a formidable 14th-century building next to the Stour River. The gate consists of Kentish stone, a hard gray-blue limestone and has a drawbridge with wooden doors.

THE GARDENS OF WESTGATE

One of the most serene places in Canterbury is this historic garden on the banks of the River Stour. This space has been open since the Middle Ages and is among the oldest gardens in the country. The garden, with formal flowerbeds, incorporates part of the Roman walls of Canterbury and the former London Road Gate. It is also distinguished by its beautiful Norman arch. This was moved here during the Victorian period from the ruins of the Abbey of Sant’Agostino. The Victorian Tower House is in the Tudor Revival style and now houses the mayor’s offices. Take a seat next to the Stour and look for the 200-year-old eastern plane tree.

BOAT TRIP IN THE RIVER STOUR

Canterbury Historic River Tours offers 40 minutes of travel along the Stour River from March to October. The trip, on a rowing boat, allows you to see some of the medieval monuments of Canterbury from a different view. It will then take you to the 13th-century Grey Chapel, under the Eastbridge Bridge and the 12th-century King’s Bridge. You will enjoy one of the best views of the cathedral and the entire city. 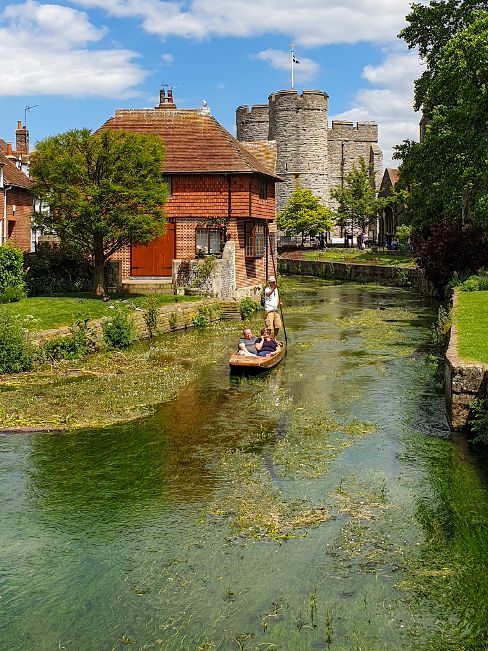 Testimony to the revival of Christianity in England, St Augustine Abbey (Mon-Sun 10-17 £8.10) and UNESCO World Heritage Site was founded by St Augustine, the first archbishop of Canterbury, in 598. For centuries it was the only religious house in Kent of true significance and its importance was recognized by the invasion of the Danes and Normans, who built a Romanesque monastery to replace the ancient Saxon buildings. The abbey was abandoned in the dissolution of the monasteries in the 16th century but a piece of Romanesque architecture can be found in a row of semi-circular arches.

The most important medieval English poet Geoffrey Chaucer chose this city as the subject of his most famous work, the Canterbury Tales on a group of pilgrims travelling through Kent to the tomb of Thomas Becket. The Canterbury Tales attraction has a sequence of scenes that bring to life the sights, sounds and fragrance of Kent and Canterbury from the 14th century. Completed with an audio-guide, the scenes tell five of Chaucer’s stories, which deal with topics such as love, courtship, intrigue, infidelity and death. All told with Chaucer’s legendary sense of malice. 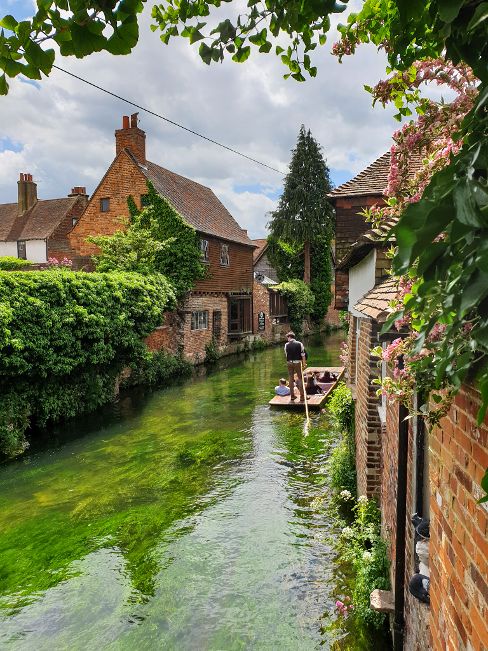 along Stour river in Canterbury

The cathedral’s main gate was erected in the first two decades of the 16th century and stands above the Canterbury Butter market. There are a lot of details to view in the beautiful octagonal towers of the door. Above this arch are the coats of arms of the Tudor dynasty, including those of Catherine of Aragon who married Prince Arthur and then Henry VIII after the death of Arthur before he could ascend to the throne. The original image of Christ in the central niche was destroyed by iconoclasts in the 16th century and the present bronze sculpture is by the German Klaus Ringwald, made in 1990.

The Romans were the first to build the walls around Canterbury in the late 3rd century. Although the layout of the city’s streets changed in Anglo-Saxon and Norman times. The circuit of the walls remained virtually the same. These defences were breached sometime between the 9th and 11th centuries during a deadly Viking raid in 835 and an eleven-day siege by a Danish army in 1011.

On the King’s Bridge, this hospice was founded in the 12th century, shortly after the death of Thomas Becket, as a place to stay for the poor pilgrims while visiting his shrine. The hospital continues to function as a hospice, providing housing for the elders of Canterbury. At the time the tomb of Thomas Becket became a place of pilgrimage, until there was a reform.

HOW TO REACH CANTERBURY FROM LONDON

Along High Street and St. Margaret’s Street you will be spoilt for choice of English clubs including: 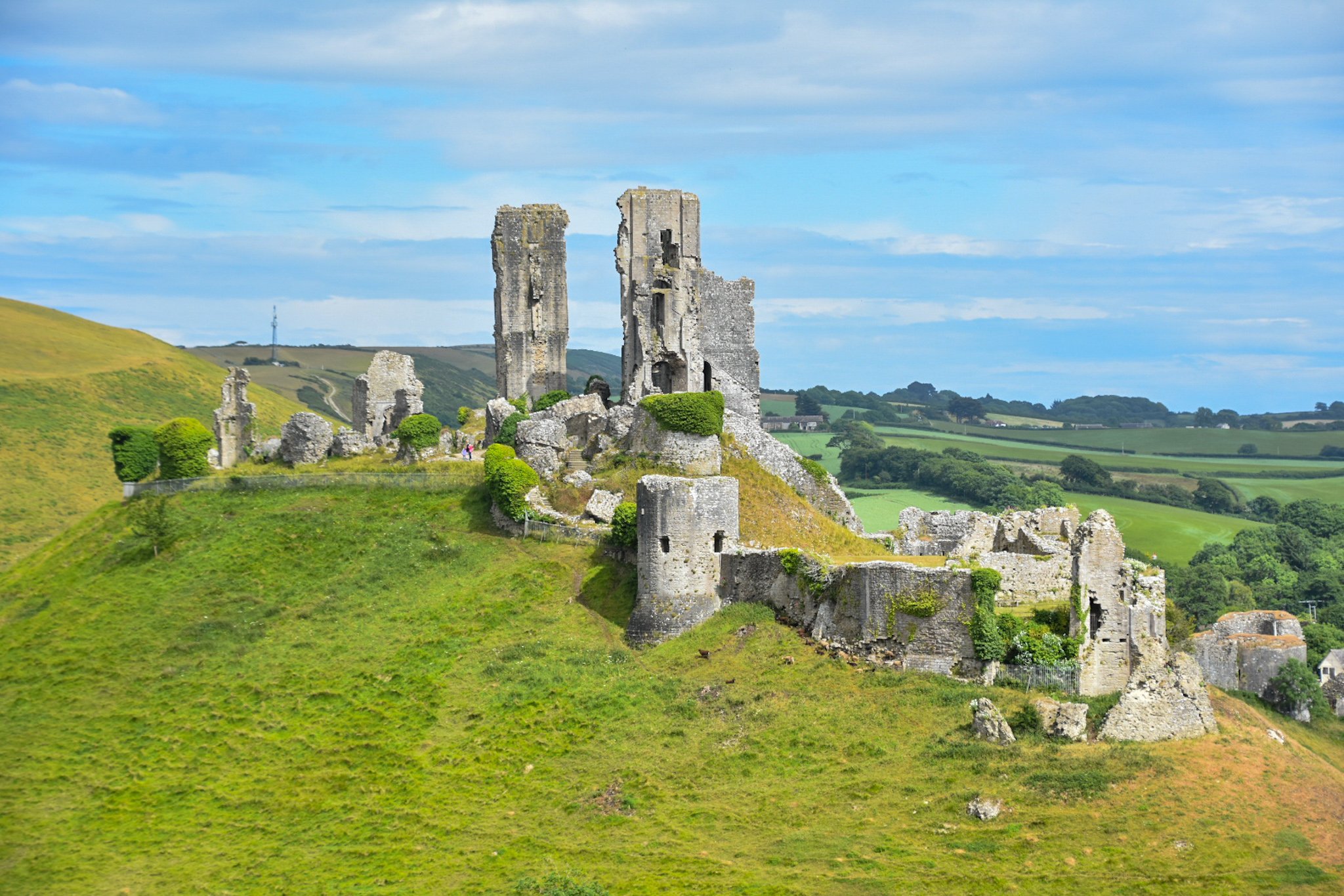 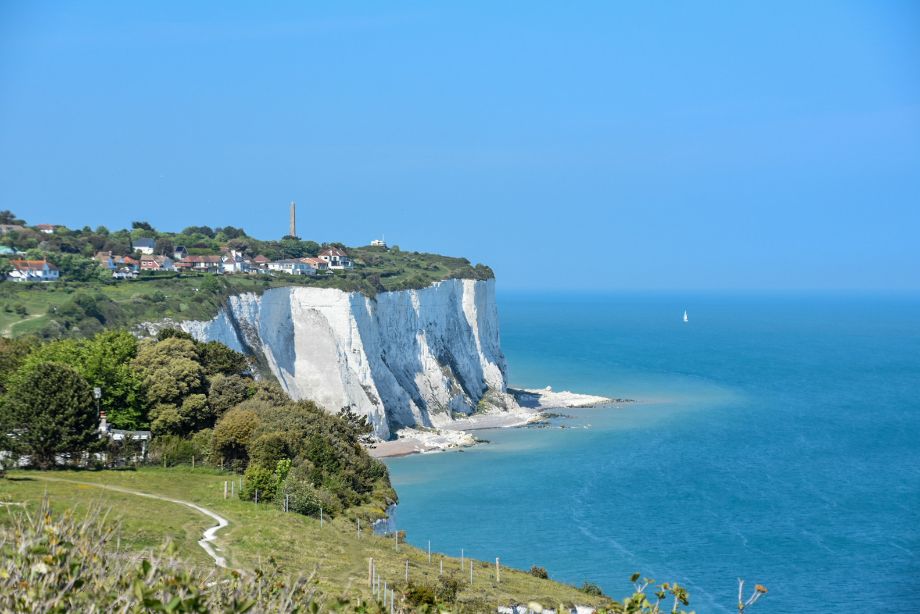