Often we tend to confuse the name of these three territories United Kingdom, England and Great Britain, to clarify any doubts:

HOW THE UNITED KINGDOM IS CREATED

The UK has made a significant contribution to the world economy, especially in technology and industry. Since World War II, however, the UK’s most important exports have been cultural, including literature, theater, cinema, television and popular music that draw from all parts of the country. Perhaps Britain’s largest export was the English language, now spoken in every corner of the world as one of the leading international media of culture.

THE UNITED KINGDOM IN EUROPE

The best time to visit the country is from April to September with long days and pleasant temperatures. The months of March and October are intermediate and the temperatures are colder.
The winter months from November to February are colder and the days shorter.

For Italian citizens, at the moment and throughout 2020, they can visit the country with an identity card valid for expatriation or passport.

There are various solutions on how to get to the UK:

The official currency of the United Kingdom is the British pound or pound sterling.
1 GBP = 1,18 EURO (january 2020). There are numerous Atms and currency exchanges.

The voltage used is 230V and the electric frequency is 50 Hz.
The plug used and the type “G”

The difference is an hour behind Italy 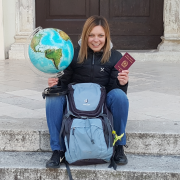