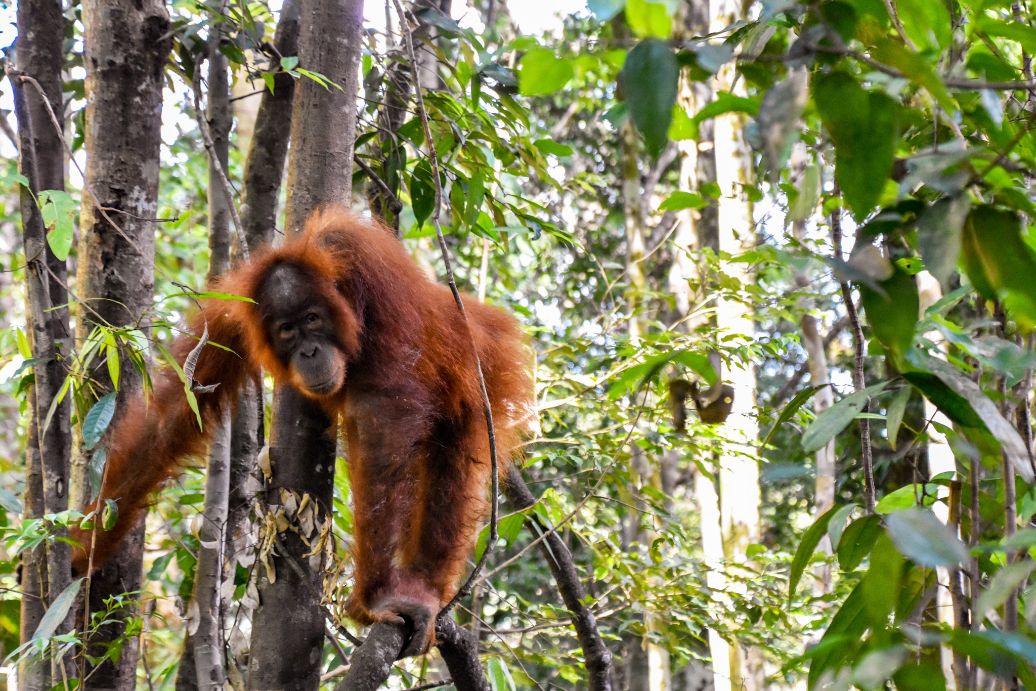 Sumatra: meeting with orangutans in the jungle

One of the most unforgettable experiences I had in Sumatra was the meeting with the orangutans who live in the jungle, our common reddish-haired ancestors. I was lucky enough to see them again a few months after my first sighting in Borneo. It’s true, the first meeting is the one you never forget, but in Sumatra I not only saw the orangutans up close, but I got to do a trek in the rain forest, observe the footprints of different animals, Suddenly I find a leech on my leg and finally, rafting along the river. If you love adventure, this big island is for you.

But we know our ancestors better!

There are three species of orangutan: the Bornean orang (Pongo pygmaeus), the Sumatran orang (Pongo abelii) and the Tapanuli orang (Pongo tapanuliensis) – which also lives in Sumatra. In the Malaysian language, the word orangutan means “forest man”, a definition definitely appropriate for this species that shares over 97% of our DNA and that has similarities with us in behavioral traits, such as emotion and intelligence. Sumatra is one of the two main natural habitats (the other is Borneo) where the orangutans live, which are essentially solitary animals that can live up to 40 years in the wild and, if grown in captivity, even longer. The adult males are much bigger than the females: in fact, the average weight of the latter is of about 40 kg when they reach the adult age, whilst the males may weigh twice as much. The gestation period for orangutans is about eight and a half months. Babies are weaned when they are 3 to 4 years old, but they will spend another 5 years with their mother before acquiring the skills and knowledge necessary to survive independently in the forest. They spend about half their day looking for food, in fact they eat wild fruits such as lychees, mangosteens and figs. They live most of their lives high up on the treetops where they build nests to sleep at night and rest during the day. Their bodies have incredible strength: thanks to their huge arms with elongated fingers and also to their grasping feet, they are able to move between the tops of the stems, swing or climb from one tree to another.

ORANGUTANS: A SPECIES AT RISK

For many centuries, Sumatra had been almost totally covered by a dense rainforest and was (and still is) the cradle of many beautiful creatures such as the orangutan, tigers, elephants and rhinos. At the beginning of the 20th century, however, the young automotive industry required a huge amount of rubber to produce tires. So the Dutch government, the colonial leader of many parts of Indonesia at that time, in agreement with some sultans who dominated northern Sumatra, began the massive ​ deforestation of most of the rainforest around the city of Medan, in order to create huge rubber tree plantations. Subsequently, many such crops were established around some northern areas of Sumatra, such as the plantation created in today’s Bukit Lawang area. Today, rubber plantations have given way to palm oil plantations, and unfortunately, neither the Dutch government of the time nor the subsequent Indonesian government has been concerned with preserving much of the wildlife or rainforest itself. Other threats to orangutans include poaching and subsequent killing for their valuable wild meat and their alleged medicinal value as a means of crop protection. Many young specimens are captured and then sold illegally as pets, held captive in frightening conditions, far from a life in the wild. Some are illegally exported out of the country and kept in private zoos or are used as entertainment in circus shows. In July 2016, the IUCN reclassified Bornean and Sumatran orangutan status as critically endangered, meaning that they are on the verge of extinction.

Bukit Lawang is a fairytale village built along the banks of the Bahorok River. The small houses are connected to the surrounding large hectares of jungle by small bridges across the river, where it is not uncommon to see people washing clothes or bathing. In 1973, two Swiss zoologists founded a rehabilitation centre for orangutans here. It sounds crazy, but not long ago these primates were used illegally as pets throughout Indonesia! The center was founded precisely to reintroduce these relatives to their natural habitat and thanks to funding from the WWF and the Zoological Society of Frankfurt, the structure was built and completed not far from the nearby village of Bohorok, to minimize human contact as much as possible. Here, the rangers taught the orangutan all the essential skills to survive in nature and, after a certain period of quarantine, at the end of an intensive program of familiarization with the rainforest, the animals were again able to live in nature. The opportunity to see the orangutans up close attracted to Bukit Lawang both locals and international tourists. In addition to the rehabilitation center, starting in the late 1980s, the first treks were organized in the surrounding jungle. At that time it must have been a real adventure for tourists! Since the beginning of the 90s, ITGA-HPI, the Indonesian Association of Tourist Guides, has been working to form and examine all the guides that want to take tourists into the jungle. The center operated until 1995, when officials decided that the Bukit Lawang site was no longer suitable for the release of orangutans. Today, the Sumatran Orangutan Conservation Programme continues to save and release dozens of orangutans and the center is a great place to see orangutans in the jungle or on feeding platforms.

HOW TO GET TO BUKIT LAWANG

The best time to visit Bukit Lawang is during the dry season, which falls approximately between February and October.

Go with a responsible, informed and attentive guide that respects the rules of behaviorwithin the jungle for responsible tourism. It is important not only because it guarantees you a beautiful experience in the jungle but also because it is also essential to keep tourism in Bukit Lawang environmentally friendly.Also, in order for guides to respect wildlife, you should be very explicit about their behavior. If you see something you disagree with, talk to them and raise their awareness. Inappropriate behaviour may be reported to the Association of Indonesian Guides.

RULES TO BE FOLLOWED

There are a few simple tricks when hiking in the jungle:

Minimize the use of plastic while you are in Bukit Lawang and generally while traveling to Indonesia, a country that has a huge waste disposal problem. Do your part by buying a bottle of filtered water instead of taking an infinite number of plastic bottles.

After arriving Bukit Lawang I decided to do trekking with the guides of two days with a night in the jungle, staying at Sam’s Bungalow. After spending the night in a comfortable room listening to the river running out of my window, I woke up well rested and ready to start trekking! It is necessary to reach a minimum of three and a maximum of seven people to be able to make the excursion with the guide Our first stop was in a rubber plantation and after walking for a few minutes, we saw a group of Thomas monkeys We had not yet entered theGunung Leuser National Park when we noticed some rustling in the trees. We approached to look closer and…Woooow! We saw our first orangutan with a lot of emotions! Generally, the paths near the entrance to the rainforest are quite passable but from a certain point on, they become progressively more muddy and sparse. Not long after, we ran into a small band of orangutans that roamed through the trees around us but the most beautiful encounter was with Mina, the heroine of the jungle. Mina is a very big orangutan, and also very aggressive with humans, because he saw his mother killed by a man. There is nothing better than seeing animals in their natural habitat because the jungle is their home and we are guests of honor but intruders who must always be very careful. Around four in the afternoon, we arrived at our bivouac for the night near a river. The “camp” consists of a cooking hall with two small structures, one for four tents and one with two double mattresses, where ​ we slept. It’s also possible to take a refreshing swim in the river, which I did before I had dinner by the river. Dinner was something incredible! We ate a stuffing of vegetables and a tasty curry, rice, potato pie and some fried tofu and tempeh, a wild symposium where both we and the guides literally licked our fingers and then fell asleep at nightfall.

We woke up with the sound of the river at the first light of dawn and after a delicious breakfast given by super delicious fruits in fact I tasted the sweetest pineapple we have ever eaten, many passion fruits with a side dish of clementines and bananas then we continued with the trekking. The walk of the second day was shorter and less intense than that of the day before, the duration a few hours. Between various ups and downs we faced the last descent before finding ourselves in front of the river. From this point, the most alternative and exciting way to return to Bukit Lawang is to go rafting. The “raft” on which we sailed consisted of a couple of air chambers filled with nets. The guides sailed the rapids with long sticks and we had a lot of fun on the river. All our backpacks had been secured in large plastic bags, so there was no need to worry too much about clothes and electrical things. Rafting also gives you the chance to see the jungle you just experienced from another point of view. 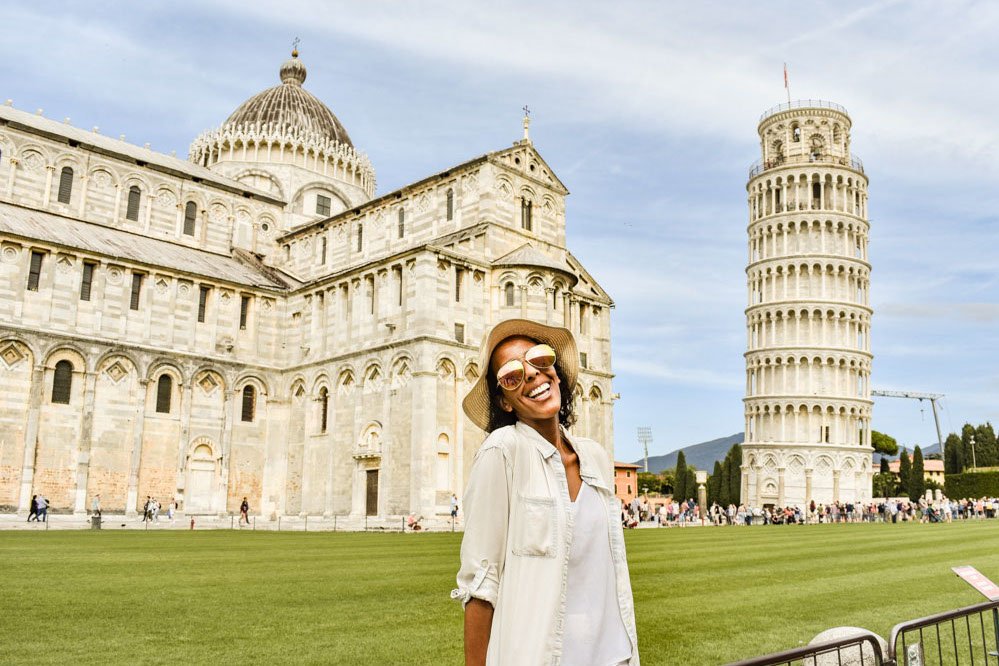 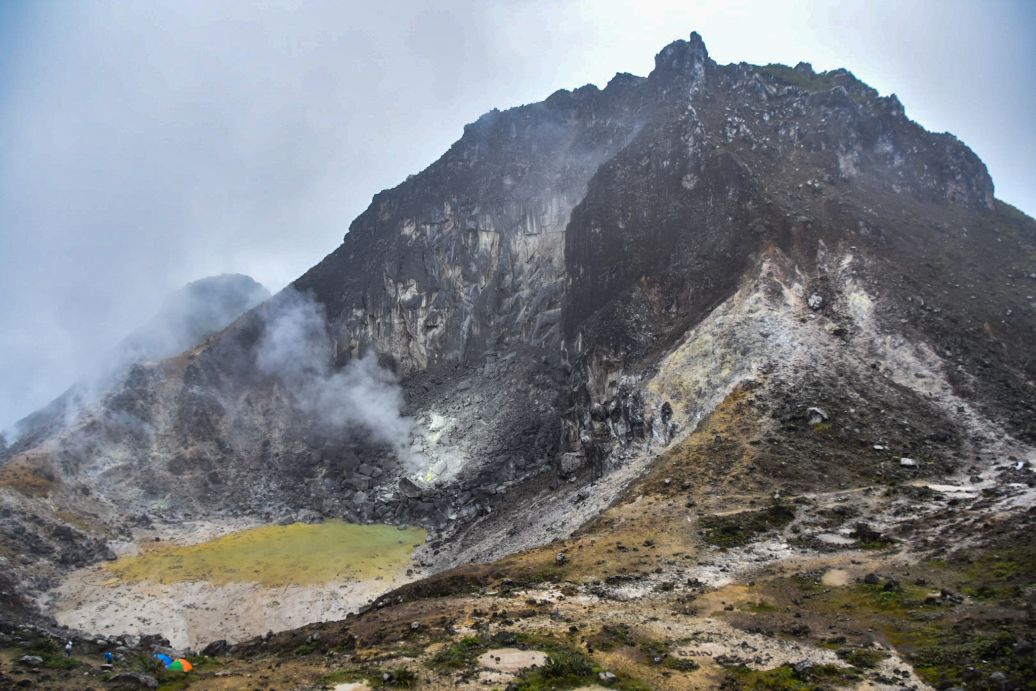